I have said this before but: the animated movies from Warner 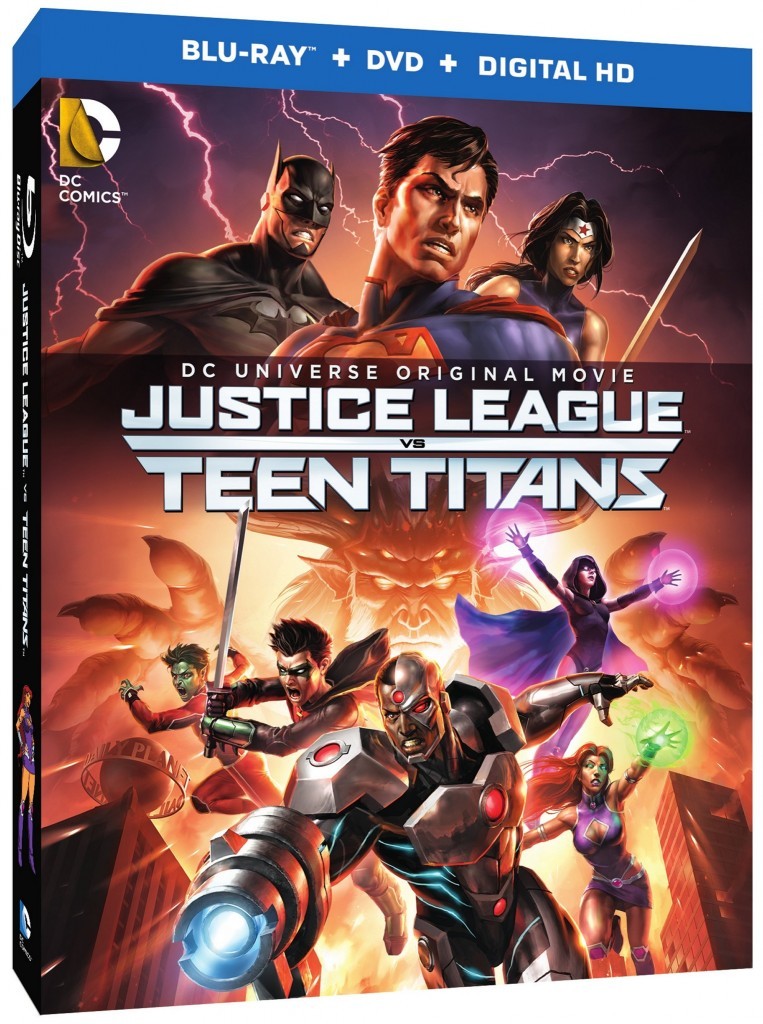 Brothers are highly entertaining and enjoyable.  The newest offering from Warner Brothers is called Justice League vs. Teen Titans. The mere mention of Teen Titans had me a bit worried. I was afraid this movie was going to be like the awful Teen Titans Go cartoon airing on Cartoon Network, but fortunately this movie isn’t played for laughs.

The movie opens with the Justice League fighting against the Legion of Doom outside the Hall of Justice. The heroes are relatively quick at thwarting the plans of the vile group of miscreants but they soon find that their next battle won’t end as easily. While the members of the Justice League, Batman (Jason O’Mara), Superman (Jerry O’Connell), Cyborg (Shemar Moore) and Wonder Woman (Rosario Dawson) gather the defeated villains The Weather Wizard attempts to escape. As the Weather Wizard runs down an alley he is caught not by a member of the Justice League but by some sort of shadow creature.

Batman, believing that Robin would benefit from interactions with people closer to his age,  he sends him to the Teen Titans. After a training exercise almost kills him Robin slowly begins to open up to his new team.  When the Titans discover that the entity behind these possessions is called Trigon (Jon Bernthal) who just happens to be Raven’s (Taissa Farmiga) father.

Trigon eventually manages to possess some members of the Justice League which leads to a confrontation between the two teams. The Teen Titans must fight to free their friends and stop Trigon’s plan before all is lost.

The animation is top notch in this first outing for the Teen Titans in the direct to DVD Warner movies.  I did feel that the title Justice League vs Teen Titans was a bit misleading since the actual fight between the heroes doesn’t last long. Regardless, this movie is an enjoyable foray into the DC Universe. I am really starting to enjoy Jason O’Mara as Batman.

I would give Justice League vs Teen Titans a solid 7 out of 10. This movie isn’t perfect and I really want to bitch slap Damien if it weren’t for the fact that he would kick my ass. Seriously, this is a well done animated movie and would make an excellent addition to your collection.  Director Sam Liu did a great job bringing these two teams together. I am really looking forward to Liu’s next outing when Batman: The Killing Joke is released later this year.

Justice League vs Teen Titans is on shelves now as well as being available for digital download. If you a fan of owning a physical copy (much like I am) there are a couple of options for you. The Deluxe Edition comes with a Robin/Damien figure and the Blu-ray, DVD and Digital version $29.99. The standard Blu-ray retails for $24.99 and the DVD retails for $19.98.