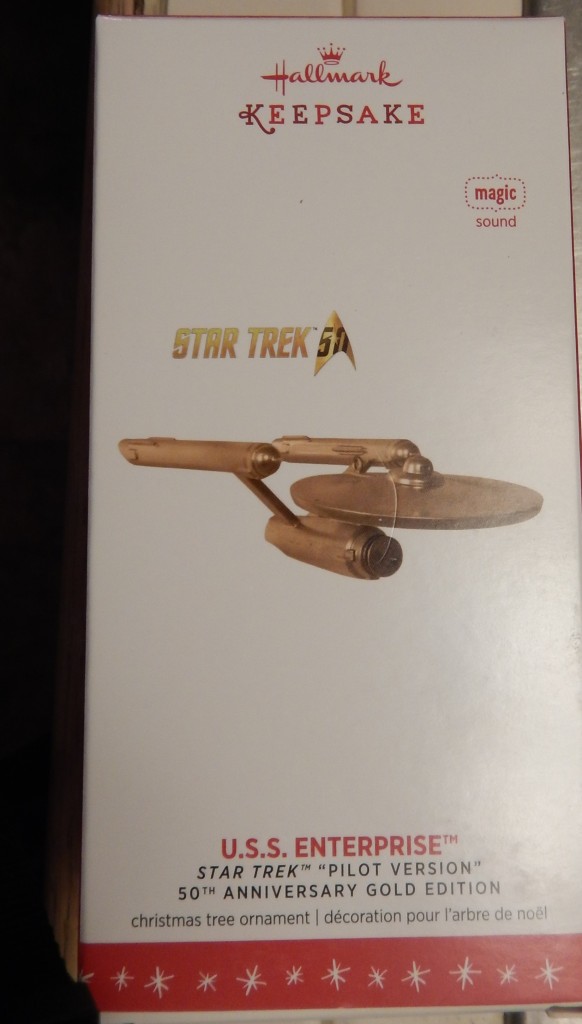 a long time to be alive but if you are a television show, 50 years is an unprecedented long time to stay popular. The television show I am talking about is Star Trek: The Original Series. In 1966 a new science fiction show created by a LAPD motorcycle cop premiered and the sci-fi landscape was changed forever. Star Trek is everywhere. It is being rerun on numerous television stations, the original crew has been re-booted for the big screen and there are even Star Trek Christmas Ornaments.

Speaking of Christmas ornaments, Hallmark has had a long tradition of making Star Trek themed ornaments. The first Star Trek ornament was the U.S.S. Enterprise which made its debut in 1991and now 25 years later Hallmark has released a new version of that classic ship. In order to celebrate Star Trek’s 50th anniversary Hallmark has released a gold toned U.S.S. Enterprise. 50 years is after all the golden anniversary and though a bit gaudy she still is the greatest ship in the fleet.

Since the movie universe is a bit different from television show I should clarify what version is being reviewed. This U.S.S. Enterprise NCC-1701 ornament is based on the ship from the Prime Timeline and is the one from Star Trek the Original Series.  This very lightweight U.S.S. Enterprise is approximately 6 inches long and 3 inches wide. Sculpted by Lynn Norton this marks his 27th Star Trek ornament. It is fitting that the first Star Trek ornament he sculpted was the Enterprise in 1991. Just like other ornaments in the last few years, this ornament does not have to be plugged into a string of lights; it is powered by 3 batteries (included). This “magic” ornament recites the opening monologue by William Shatner from the Original Series and plays part of the theme music. 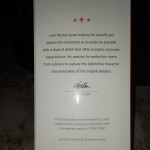 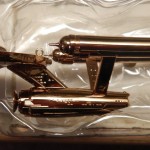 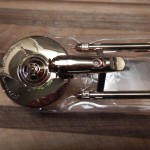 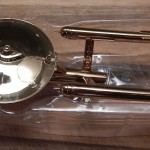 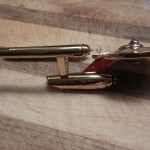 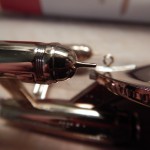 The U.S.S. Enterprise 50th anniversary version will look great on your tree this holiday season or, since the ship is battery operated, it can be hung at your desk for year round enjoyment. Don’t miss this golden opportunity to show your love for all things Trek and pick up yours today!