The holidays are fast approaching, and quality Christmas gifts are getting harder and harder to find! Luckily, Diamond Select Toys just sent a m

assive shipment to your local comic shop! Whether the loved one on your shopping list likes Batman, Spider-Man, the Avengers, the Muppets, Nightmare Before Christmas, magic, scarecrows, skeletons or Mandroids, you’ll find a wide selection of stocking stuffers at your local store! Red on for details, then find a comic shop at comicshoplocator.com, or order online!

A Diamond Select Toys release! What frightens the Dark Knight? The Scarecrow knows! Thanks to the Scarecrow’s fear gas, Dr. Jonathan Crane is one of the few foes in Batman’s rogues gallery who can strike fear in the heart of the caped crusader. This approximately 6” resin bust is based on the Scarecrow’s appearance in Batman The Animated Series, and sits atop a pedestal inspired by the show’s art-deco architecture. Limited to only 3,000 pieces, it is packaged with a certificate of authenticity, and comes in a full color box. Sculpted by Varner Studios! (Item #JUN162390, SRP: $59.99)

A Diamond Select Toys release! The sorceress of the DC Universe is the next DC Animated Gallery PVC figure! Based on her appearance in Batman: The Animated Series, this sculpture depicts stage magician and genuine magic-user Zatanna Zatara posed as if in the middle of a performance, on a stage base, pulling a bat out of her hat. This 9-inch scale figure is cast in PVC plastic and features high-quality paint applications, and is in scale to all Gallery and Femme Fatales figures. Packaged in a full-color window box. Sculpted by Varner Studios. (Item #JUN162389, SRP: $45.00)

A Diamond Select Toys release! Marvel’s most popular super-hero is the newest addition to the Marvel Gallery PVC line! Sculpted in 9-inch scale, this sculpture of Spider-Man sees him balanced on one foot atop a New York City rooftop, surveying the city he is sworn to protect! Featuring detailed sculpting and paint applications this PVC diorama is in scale to all Gallery and Femme Fatales PVC figures, and comes packaged in a full-color window box. Sculpted by Mat Brouillard! (Item #SEP162538, SRP: $45.00)

A Diamond Select Toys release! After 13 years, the Marvel Minimates line has amassed one of the widest arrays of characters of any collectible toy line. But there are still characters in the Marvel Universe left to make! For Series 69, DST has selected frequently-demanded characters to make up one of the most fan-favorited series in history! Black Knight and Enchantress each make their Minimates debut, and our first-ever Tigra teams up with a Classic Falcon. Then, Iron Man foe Blizzard II takes on an armored SHIELD Mandroid, while a rare, one-per-case set pits the original Blizzard I against that same Mandroid! Each 2-inch Minimates mini-figure features up to 14 points of articulation and fully interchangeable parts, and each two-pack is packaged in a full-color window box. (Item #JUN162395, SRP: $9.99/ea.) 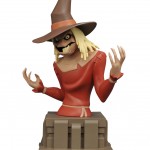 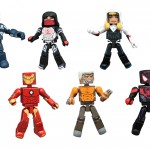 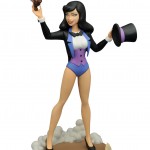 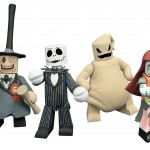 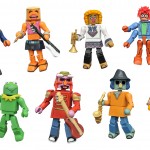 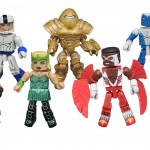 A Diamond Select Toys Release! It’s time for some very special guest stars! The Muppets Minimates line continues with more of your favorite characters from across their history, in four all-new two-packs. Characters include Kermit as Constantine with Patrol Bear Fozzie, Electric Mayhem members Floyd Pepper and Janice, and exclusive two-packs of Mayhem members Zoot and Lips, and Muppet Newsman with Pepe the King Prawn! Each 2-inch Minimates mini-figure features up to 14 points of articulation with fully interchangeable parts and accessories. Make your own Muppets! (Item #JUL162619, SRP: $9.99)

A Diamond Select Toys release! Vinimates are the gifts that keep on giving! The Nightmare Before Christmas makes its grand entrance to the Vinimates vinyl figure format with four main characters – Jack, Sally, Oogie Boogie and the Mayor! Sculpted in the style of a Minimates mini-figure, each 4-inch PVC figure strikes a dynamic pose, and features a ball-jointed neck to further customize each pose. Each Vinimate is packaged in a full-color window box.