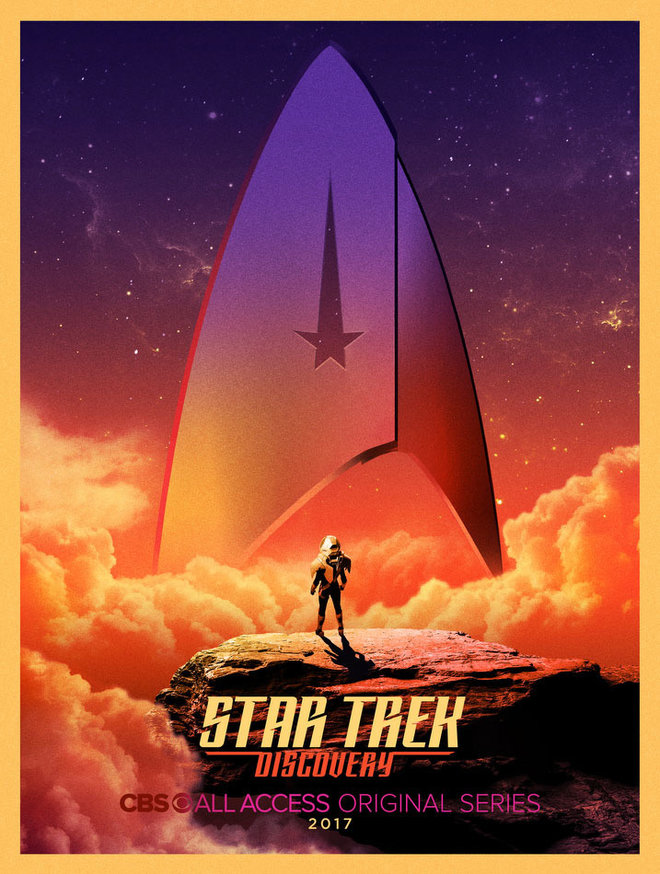 not deal well with change. Change however, isn’t the issue. Know that I am a Star Trek fan. According to my father I have been watching Star Trek since I was 3. I love Star Trek. I am the proud owner (and wearer) of several uniforms and I have a large storage box filled with phasers, tricorders and communicators from every show. I can recite movies and episodes from memory and even identify the movies from the music. I am not just a casual fan. That being said I must address the newest incarnation of my beloved Star Trek, a show called Star Trek: Discovery.

Star Trek: Discovery allegedly takes place 10 years before the 5 year mission of the U.S.S. Enterprise under the command of James T. Kirk with Mr. Spock as first officer. At this point Kirk should be a young lieutenant serving on the U.S.S. Farragut under Captain Garrovick. Spock should be serving on the Enterprise as Pike’s first officer; or it may be too early for that; the Enterprise may be still under the command of Captain Robert April.

Let’s talk about Discovery. The first episode opens with Captain Georgiou (Michelle Yeoh) and Lt Commander Michael Burnham (Sonequa Martin-Green) from the starship Shenzhou on a mission to save an alien race that are having water supply issues. During this mission Georgiou informs Burnham that it is time she takes on a command of her own. They accomplish their mission (3 phaser blasts down a well) and beam back to the ship.

The next mission is to investigate a communications relay that has stopped working. When they arrive Lt. Cmdr. Burnham must use a thruster suit to get to the damaged piece of equipment. During her investigation he notices an object in the asteroid field that turns out to be a ship. Burnham rockets to the ship to investigate. While she is examining the ship she receives a proximity alert. When she turns around she finds she is not alone, there is a figure standing behind her. The figure has a Klingon insignia on his spacesuit and he is holding a bat’leth. The Klingon attacks and during the very brief skirmish, Burnham kills the Klingon. She did not walk away unscathed. Her suit suffers damage and she falls unconscious. Captain Georgiou and the crew of the Shenzhou are in a race against time to rescue her because of the high levels of radiation in the asteroid belt.

Burnham wakes in sickbay; where she is being treated for radiation burns. Before the treatment is complete she bolts from the bed to inform the captain that there are Klingons hiding among the asteroids. Burnham is ordered back to sickbay while the captain weighs her options.

After contacting Starfleet Command, Captain Georgiou is ordered to take no action and wait until backup can arrive. The captain informs Burnham that they will not fire first and she feels that Burnham is letting events from her past dictate her actions in this situation. We find out that Burnham’s parents were killed in a Klingon assault. Burnham contacts her adoptive father, Sarek (James Frain), to find out how the Vulcans were able to negotiate with the Klingons. According to Sarek it was the fact the Vulcans did not back down which led to their treaty.

Burnham tries to convince the captain that firing first is the only way they will survive this encounter. When Georgiou refuses to attack first Burnham renders her unconscious with a Vulcan neck pinch. Burnham then goes to the bridge and orders that they lock weapons on the Klingon, claiming the order came from the captain. Before anything happens Captain Georgiou appears on the bridge and orders Burnham to the brig.

I was really surprised that a show about the starship Discovery wouldn’t show the ship in the first episode. I felt like CBS was holding the ship hostage, “If you want to see the new ship that will be $6.99!” The missing ship isn’t the only thing that bothered me about this new Star Trek.

I am so confused about this Star Trek. One of the first things I have an issue with is the fact that Spock now has an adopted sister. The last time Spock gained a sibling, fans were given the atrocious film, Star Trek V: The Final Frontier. Giving the character of Burnham a familial connection to someone from the Original Series is just poor storytelling. Space is vast and there are so many stories to tell that you don’t need to make up family connections Â so fans can relate. I personally feel that giving Spock an adopted sister, who has never been alluded to in 51 years of the show is stupid.

Also the creators gave Burnham Worf’s backstory, just changing the races. Worf was orphaned because of a Romulan attack and was raised by humans. Because of what happened on Khitomer Worf had a deep hatred of Romulans. Burnham was orphaned by Klingons and raised by Vulcans and because of the incident has a deep hatred of Klingons. If they really wanted the character to be raised by Vulcans she could have been raised by one of the other millions of Vulcans in the universe. They could have made Sarek a teacher or family friend; this is a much more believable scenario.

Now let’s talk Klingons. In the 1960’s the Klingon make-up was very basic. By the time Star Trek: The Motion Picture premiered in 1979 we were introduced to the bumpy headed Klingons. This version of the Klingon race became the norm across all of the Star Trek spinoffs. Enterprise even attempted to explain why there were 2 different types of Klingons. This explanation was actually feasible. Now the Klingons are dark metallic skinned creatures with different bumps. Also, from the information we were given in this episode, the Klingon culture has changed a bit as well.

If the creators wanted to a change the Klingons that much why not just make a new race that were Klingon-esque?  Even in the reboot the Klingons were a bit different but not so different that you had to wonder what they were. The creators had a golden opportunity to create a new race and give fans something new and different, instead of remaking an already established race.

One of the other things that I have an issue with is the design of the U.S.S. Discovery. They took a design that Gene Roddenberry himself passed on to use as the main starship. I am curious if Bryan Fuller and Alex Kurtzman just picked random ideas out of a hat to make this new series. I am just very disappointed in what I saw.

I did like the characters of Captain Georgiou and Lt. Cmdr. Burnham although assaulting your commanding officer would get you more than a slap on the wrist. The stunt that Burnham pulled would have gotten her kicked out the service, but hey, the suspension of disbelief. I however really hated the character of Lt. Saru (Doug Jones). His character came from a planet where you were either predator or prey and his species was prey. Since he was raised to be afraid of everything his constant vocalization of how scared he was really grated on me. Imagine the Cowardly Lion from the Wizard of Oz being even more frightened and you can picture Lt. Saru. I don’t know how he made it through Starfleet. Jones is a wonderful actor but what I saw of this character I found very annoying.

I cannot address any events that happened in the second half of the premiere since I refuse to pay for a channel. Between having a cable bill, Netflix bill and Hulu bill I don’t need to add an additional 7 bucks a month for one television show. I have read nothing but positive things about Star Trek: Discovery from critics and friends alike but I am in the minority. I would like to say I will give the series a chance but I am not going to keep watching.