Hard Copy: A Review of the New Novel, A Mound Over Hell by Gary Morgenstein 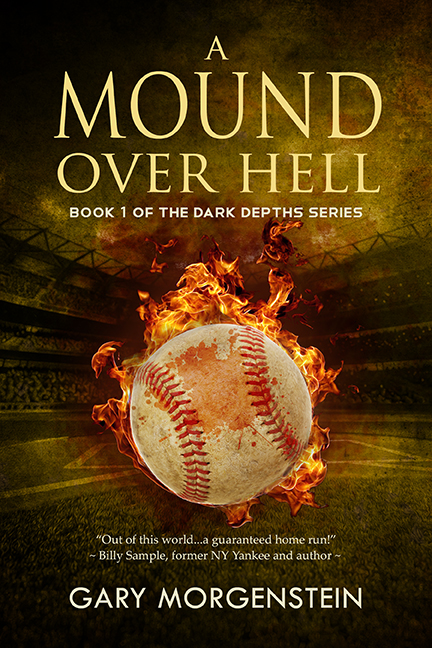 it is impossible to pigeonhole it. The most significant works of science fiction were so important precisely because they did not remain within the original, limited definition of the genre. Philip K. Dick, Stanislaw Lem, or Kurt Vonnegut, among others, dealt with the nature of reality, not space travel and ray guns – even if such hardware existed within the story.

Gary Morgenstein’s  A Mound Over Hell is a prime example. The story does not occur in a far-away galaxy, two thousand years in the future, or in an alternate universe. It is set right here on the Earth we know, and only eighty years in the future – a time in which language and customs are not all that different from ours. It may remind the reader of the premise of Orwell’s 1984, where he described a totalitarian regime that had been established only a few decades in the future but is devastating in its power. In A Mound Over Hell, people still discuss war, sport, and relationships in the same way we do, but the circumstances are nightmarish. And very likely, they are so because what we are doing right now, in our time, even though the author is never heavy-handed or preachy in his approach.

Is it a dystopian novel, then? Yes. Radical Islam had defeated the United States in World War III. An elderly woman called “Grandma” by everyone rules the remnants of the United States. She seems to be all love, all goodness, deeply caring about children and family. Of course, the word “seems” may be important in this statement. Can the reader trust her? Her persona reminded me of my all-time favorite Israeli leader, Golda Meir. Golda, as everyone called her, talked quite a bit about her grandchildren, and ran many cabinet meetings at her kitchen table, serving tea and cakes she baked herself. But at the same time, she was known to be astute, decisive, and often ruthless. In Grandma’s world, religion, social media, and banks are against the law. Americans hate and fear all Muslims, and no Jews remain in the world at all; they were all destroyed. Robots, who looked like humans before the war, are outlawed since they lie about their identities and pretend to be humans and causing, therefore, social chaos.

Is it a political commentary on our time? I believe so. The war is a direct result of inequality, hatred between races and nationalities, and deep-seated fear of “others.” Worldwide terrorism and child trafficking, a normalized part of life during that future time, unquestionably started with us. Treason, betrayal, and fear are no strangers to us – we allow, even encourage them in our world.

Is it a book about baseball? Of course. The protagonist, Puppy Nedick, is a baseball historian who works in Amazon Stadium, formerly known as Yankee Stadium, and the only ballpark remaining. It’s the final season, the last game ever to be played. The players are usually holograms – but not this one. Inexplicably, famous baseball players from the past come back from the dead to participate in the game.

As the book kept coming back into my mind during the days after I had finished reading it, I realized something was nagging me, pushing me to delve deeper and go under the action and into the philosophy. My conclusion is that the book is about Tikkun Olam – healing the world – and how we are losing our ability, or even our desire, to accomplish the task.

To explain my concept, I would like to refer the reader to Theodore Herzl’s visionary novel Altneuland (The Old-New-Land). If you have never read it, or perhaps forgot it after reading it in your early youth, I must remind you that the book is a utopian novel, very close in its approach to science fiction or fantasy.

Herzl published the book in 1902, and the story takes place only two decades later, in 1923. Two intellectual, European recluses revisit Palestine which they remember from a previous visit as a desolate, sparsely populated country, sunk in poverty and inertia. To their amazement, they find a state named “The New Society” where many European Jews have settled during these twenty years, creating a cosmopolitan, egalitarian society where Muslims, Christians, and even women(!) have equal rights. Everyone enjoys the prosperity of a mixed economy comprised of public ownership of resources and private enterprise. Several languages are spoken, and any worship, or atheism, is welcome. The country looks like a giant park, bursting with greenery, even though cutting-edge technology allows efficient industry. The class system of Europe has been entirely abolished, people thrive by merit and get help when they need it, but the European love of culture remains. Visual arts, theater, opera, concerts, literature, and learning are part of life. Higher education is available to all.

Herzl was the founder of political Zionism. This outline of what the Jewish State should be, according to his immense vision, is not known to everyone and has been tainted by reality. It is sad, because his idea, in its purest form, is about inclusiveness, not division. About the economic and social success resulting from equality and mutuality, not a plutocracy. Altneuland should have become the blueprint for all societies. In addition, it represents Tikkun Olam at its most sophisticated and at the same time, highly achievable.

Tikkun Olam, the profound Jewish concept of healing a broken world is based on old rabbinic teachings and Kabbalah mysticism, but in our modern world, it is connected not with religion, but with social justice, good deeds, and with providing safeguards to those in need. It can, and should, be practiced by individuals, philanthropic organizations, and nations. It is more in tune with Secular Humanism than it is with faith. Religion is often the cause of death and destruction, but no one has ever killed in the name of Secular Humanism. And this is where Gary Morgenstein takes us with his book. He has created an enormous stage, populated by a large number of personalities, all beautifully delineated to play a part in the highly complex story. Love, compassion, hatred, revenge, friendship, cruelty, and evil, are all thrust at us as they always are in the vast panorama of life. The society in A Mound Over Hell has forgotten that the world must be continuously repaired if we are to survive. Just like our own society, and developing from it, it allows murder, torture, and abuse, and the tearing apart of entire countries. And for what?

When you read the book, it is easy to be swept by the fast action, the emotions, the sense of place and time. It is immensely readable and absorbing. Gary Morgenstein is a first-rate storyteller, and you will be reading at a fast pace. But once done, I am sure many readers will experience what I have – the high value of the warning we must heed. Books like that do not appear often, and when they do, they should never be missed. I can’t wait for Volume II. And III.

Ilil Arbel is the author of Maimonides, a Spiritual Biography, among other books, short stories, articles, and blog posts. Her subjects include Judaica, myth and folklore, mysteries, and biographies. She is currently working on two projects – the second book in the Madame Koska’s Mysteries series, and Hillel, Herod, and Jesus, a controversial biography of the first-century sage, Hillel the Elder.  Born in Tel-Aviv, Israel, Ilil is the granddaughter of the Russian-Israeli writer Dr. Avraham Wissotzky, whose books include Tel Aviv, Green Flame, and Saturday and Sunday. She holds a B.A. in Fine Arts and an M.A. and Ph.D. in Liberal Arts.

Our thanks to Ilil Arbel for her wonderful review.