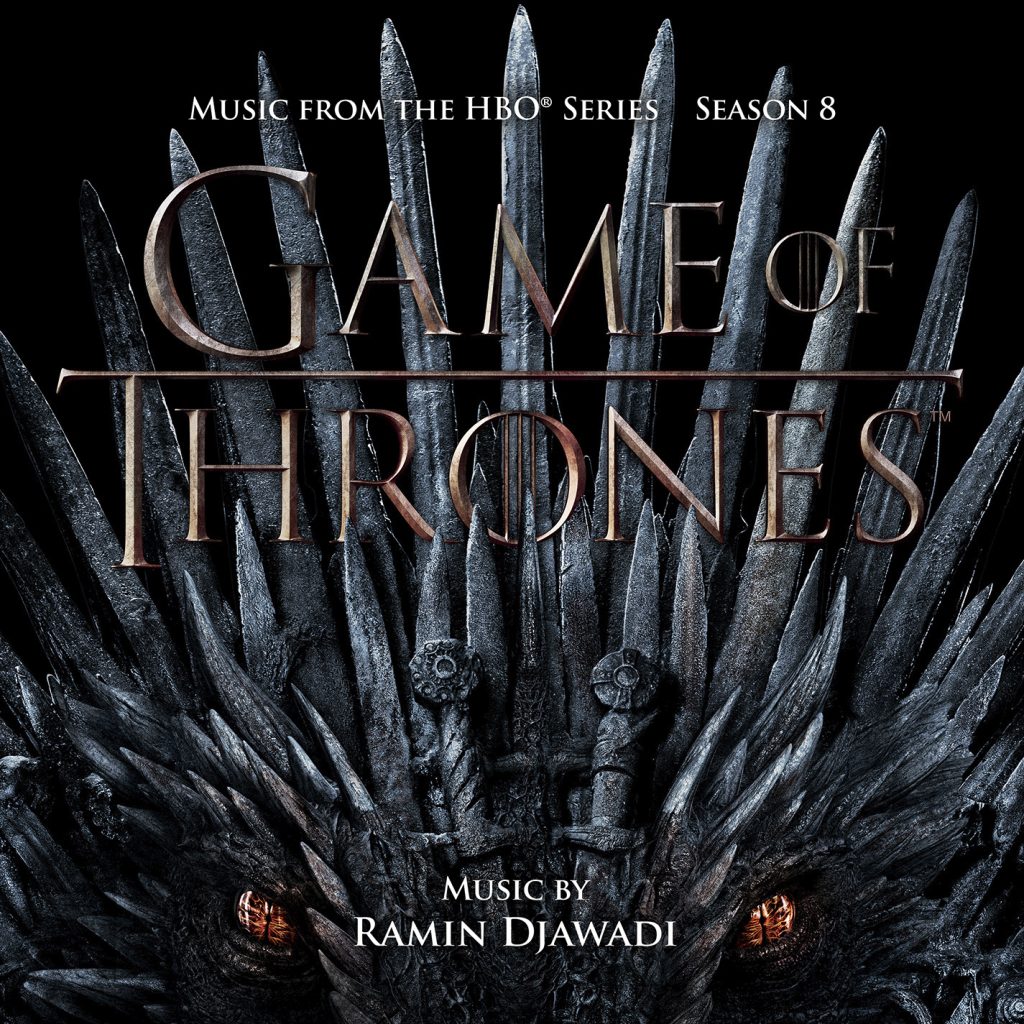 (Music from the HBO Series) Season 8 – the soundtrack from the final season of the award-winning HBO series. The album features music by Emmy® Award-winning and Grammy® Award-nominated composer Ramin Djawadi (Westworld, Iron Man, Jack Ryan, Pacific Rim), and is available for sale digitally and for streaming today, with a Double CD scheduled for release scheduled for July 19 and a vinyl release later this year.

Among the album’s 32 tracks, fans will find Djawadi’s 9-minute opus “The Night King”, as well as an instrumental version of the emotional ballad “Jenny of Oldstones”. “The Night King” theme debuted during a pivotal moment in the epic battle episode “The Long Night”.

”The Night King” went viral immediately after premiering on the show and dominated a top two spot on Billboard’s Top TV Songs chart for the month of April 2019with 2.2 million streams. Within days, “The Night King” reached the top 4 most downloaded songs on iTunes and the top 18 most watched videos on YouTube and dropped the jaws of audiences and critics alike. Nerdist described the song as “a series highlight…Djawadi’s finest on the show”, while Indiewire proclaimed that Djawadi “really outdid himself here with the soaring, searching score that gave the episode its own unique flavor while also selling its most emotional beats.”

The album also features a new arrangement of “The Rains of Castamere” from Ramin and Serj Tankian. Tankian, best known as the lead vocalist of System of a Down, is an accomplished poet, songwriter, visual artist, activist, and composer. In 2017, Serj did a guest appearance at the Game of Thrones Live Concert Experience performing this arrangement.

“The music for season eight concludes the story arc of Game of Thrones,” explained Djawadi. “Though it’s tough to say goodbye to the series, I hope this soundtrack transports the listener back to the world of Westeros. It’s been such an honor to be a part of this incredible show for the past eight years.”

The Game of Thrones (Music from the HBO Series) Season 8 soundtrack has been released in time for the conclusion of the 8th and final season of Game of Thrones and is now available for digital purchase and streaming. The track listing is as follows:

Additionally, the Game of Thrones Live Concert Experience returns this fall for a 20-city amphitheater tour, bringing the music of Game of Thrones composer Ramin Djawadi (who will conducting and performing at select shows) to stunning new life at outdoor theatres across North America. As we say goodbye to one of the biggest shows and scores in television history, fans can relive the greatest musical pieces and footage from all eight seasons in an immersive outdoor concert experience. For a full list of tour dates and tickets please visit HERE.

About Ramin Djawadi
Ramin has won an Emmy Award® for Game of Thrones® season seven, and been nominated for six Emmy® Awards and two GRAMMY® Awards for Game of Thrones (2018) and Iron Man (2009). Versatility has defined his career, from celebrated television scores for Game of Thrones, Westworld, Jack Ryan, and Prison Break to feature films such as A Wrinkle in Time, Mountain Between Us, Slender Man, The Great Wall, Pacific Rim, Iron Man and Clash of the Titans. Ramin has even composed scores for blockbuster video games including Medal of Honor, Gears of War 4 and the upcoming Gears of War 5. His entrancing and elegant compositions typically average over 3.5 million plays monthly on Spotify, while spawning countless viral covers and even topping Billboard’s Top Soundtracks chart. Ramin’s Game of Thrones albums have amassed over 450 million streams to date and have continued to shine as one of the most captivating scores in television history. Ramin is currently working on the music for season two of Tom Clancy’s Jack Ryan on Amazon, season three of Westworld, and Gears of War 5 among others.

About HBO Licensing & Retail
HBO Licensing & Retail, a division of Home Box Office, Inc., partners with best-in-class licensees around the world to give HBO’s global audience new and exciting ways to engage with their favorite shows. The division leverages iconic, award-winning HBO programs such as Game of Thrones, VEEP, Sex and the City, Silicon Valley, Insecure, The Sopranos, Big Little Lies, True Blood and more to create officially licensed consumer products, innovative merchandise programs, retail activations and live immersive experiences. HBO Licensing & Retail works across a broad range of product categories, including collectibles, apparel, publishing, live branded experiences, digital gaming, fashion and beauty collaborations, luxury accessories, and beyond. Officially licensed HBO merchandise can be purchased in retail stores around the world and online in the US at http://store.hbo.com.

This entry was posted in Soundwaves and tagged Games of Thrones, HBO, Jack Ryan, Ramin Djawadi, Serj Tankian, Soundtrack, System of a Down, Westworld. Bookmark the permalink.