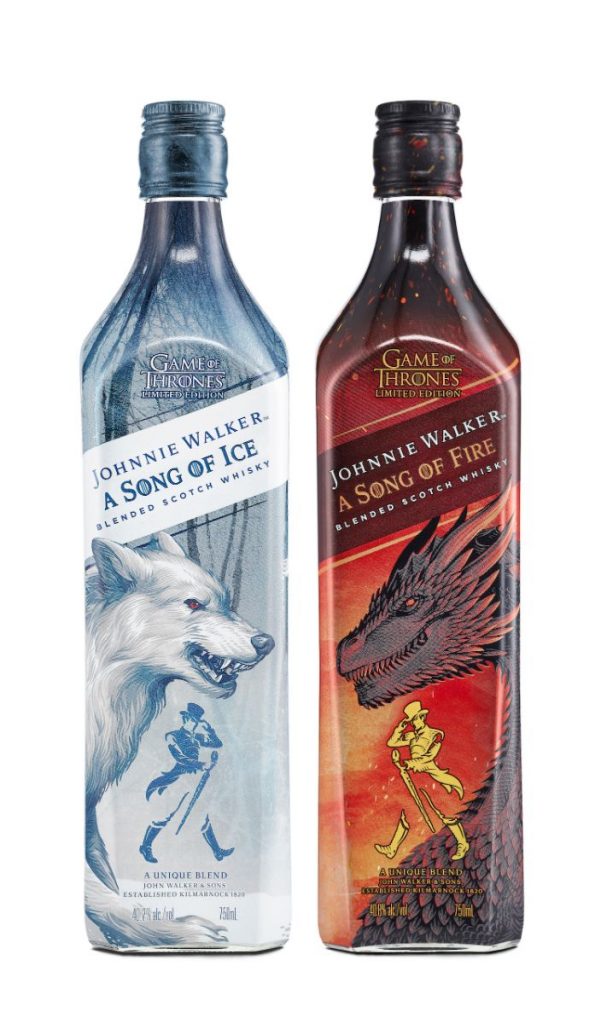 ucing two new Scotch Whiskies to the realm in honor of the enduring legacy of the critically acclaimed HBO® series Game of Thrones. A continued collaboration with HBO, these limited edition whisky blends are inspired by the iconic and powerful houses of Westeros – House Stark and House Targaryen – and are successors to the White Walker by Johnnie Walker limited edition blend launched in 2018.

Whether in conflict or harmony, this is a tale of two great houses represented by two ancient creatures. One is a house descended from the First Men. Rulers of the North and builders of the wall, they thrive in the icy-cold climate of the Direwolf. The other, a noble family of Valyrian descent and the first royal house of the Seven Kingdoms. Fire courses through their veins and is made flesh in the form of their dragons.

From House Stark comes A Song of Ice, from House Targaryen A Song of Fire. Together, the two whiskies celebrate the dynamic relationship between the houses, represented by their house sigils – the Direwolf and the Dragon – which fiercly adorn each bottle. As another nod to the complicated interactions between the two great houses in the show’s storyline, Johnnie Walker’s iconic Striding Man uncharacteristically faces backwards on the A Song of Fire bottle, revealing a face-off with the Striding Man on the A Song of Ice bottle when paired side-by-side.

“Johnnie Walker and Game of Thrones are an epic pairing. There is as much for people to discover and explore within the world of whisky as there is within the world of the show,” said Sophie Kelly, Senior Vice President, Whiskies Diageo North America. “Johnnie Walker A Song of Ice and A Song of Fire perfectly capture the essence of House Stark and House Targaryen, from the bottle designs to the unique Scotch whiskies within. Each new blend brings to life a different profile of flavors – one crisp and clean, the other rich and spicy. We hope people enjoy trying both while reliving the series with friends.” 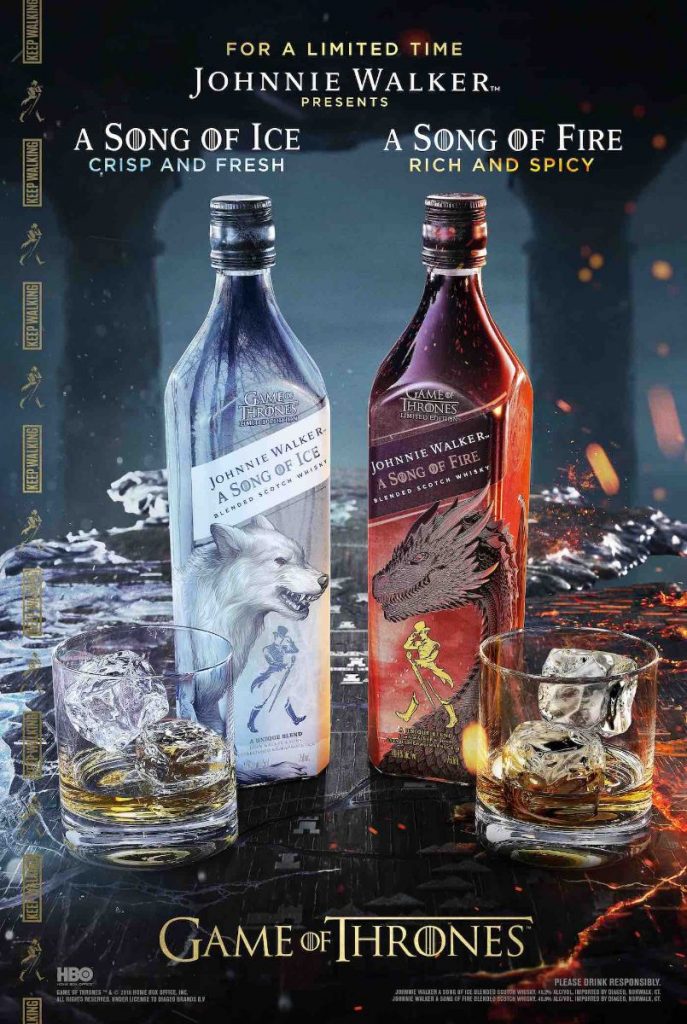 Johnnie Walker A Song of Ice features single malts from Clynelish, one of Scotland’s most northern distilleries, and exudes a crisp, clean taste like the unforgiving force of ice that shapes mountains and stops rivers. The new blend has an ABV of 40.2% and the bottle design evokes an icy setting with frosted blue and gray colors inspired by the North, known for its cold winters and frozen landscapes. Johnnie Walker A Song of Fire is rich and spicy, boasting flavors of subtle smoke from the peated malts of the Caol Ila distillery with an ABV of 40.8%. Inspired by the dragons of House Targaryen, feared for their fire breathing, the bottle design evokes a fiery setting with deep-red colors.

“We were very proud to partner with Johnnie Walker again to bring more whiskies to the realm. The Game of Thrones audience continues to both engage with the culture fostered around the series and look for the special collectibles that let it live on. After seeing the excitement there was for White Walker by Johnnie Walker, we are thrilled to celebrate the end of an epic tale by offering more quality whisky for fans of the show and whisky enthusiasts to collect and enjoy,” said Jeff Peters, Vice President, Licensing & Retail at HBO.

About Johnnie Walker
Johnnie Walker is the world’s number one Scotch Whisky brand, enjoyed by people in over 180 countries around the world. Since the time of its founder, John Walker, those who blend its whiskies have pursued flavour and quality above else.

About Diageo
Diageo is a global leader in beverage alcohol with an outstanding collection of brands including Johnnie Walker, Crown Royal, Bulleit and Buchanan’s whiskies, Smirnoff, Cîroc and Ketel One vodkas, Captain Morgan, Baileys, Don Julio, Tanqueray and Guinness.

Diageo is listed on both the New York Stock Exchange (DEO) and the London Stock Exchange (DGE) and our products are sold in more than 180 countries around the world. For more information about Diageo, our people, our brands, and performance, visit us at www.diageo.com. Visit Diageo’s global responsible drinking resource, www.DRINKiQ.com, for information, initiatives, and ways to share best practice.

Celebrating life, every day, everywhere.
About HBO Licensing & Retail
HBO Licensing & Retail, a division of Home Box Office, Inc., partners with best-in-class licensees around the world to give HBO’s global audience new and exciting ways to engage with their favorite shows. The division leverages iconic, award-winning HBO programs such as Game of Thrones, VEEP, Sex and the City, Silicon Valley, Insecure, The Sopranos, Big Little Lies, True Blood and more to create officially licensed consumer products, innovative merchandise programs, retail activations and live immersive experiences. HBO Licensing & Retail works across a broad range of product categories, including collectibles, apparel, publishing, live branded experiences, digital gaming, fashion and beauty collaborations, luxury accessories, and beyond. Officially licensed HBO merchandise can be purchased in retail stores around the world, online in the US at http://store.hbo.com, and at the HBO retail hub, the HBO Shop®, located at 42nd and 6th Avenue in New York City.