Who is Moon Knight? I am sure that before 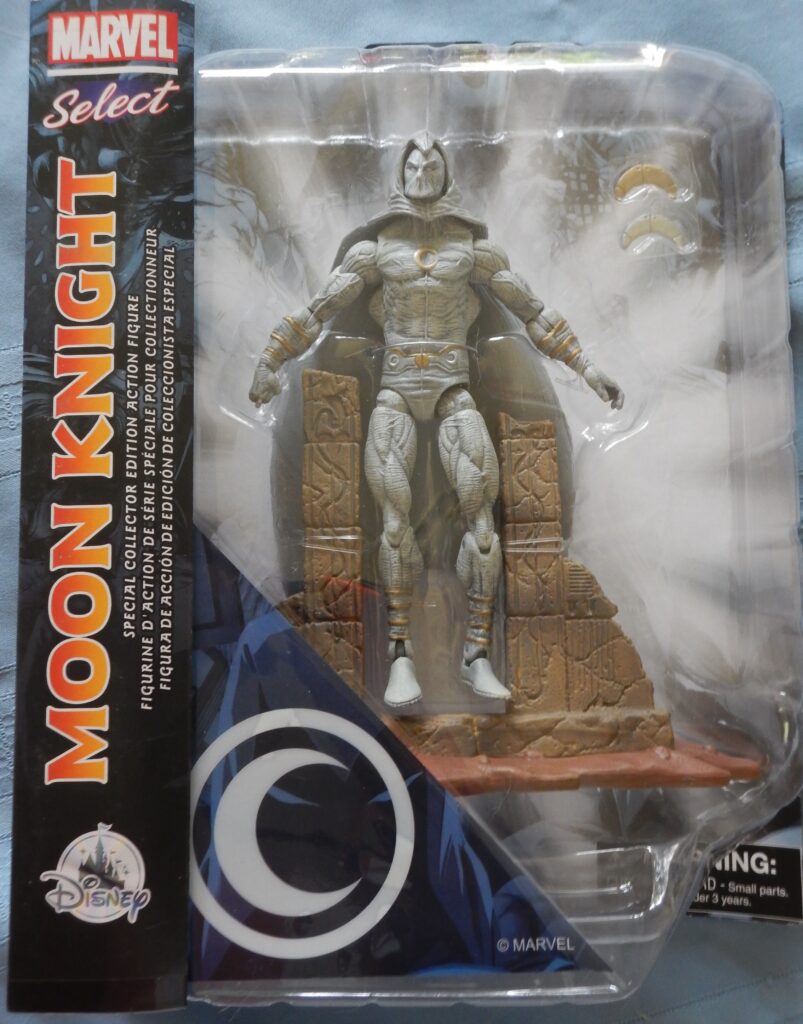 the Disney Plus aired the Moon Knight series the average person had never heard of him. Fortunately, I read some of the Moon Knight comics decades ago, so I knew a bit more, but I still wasn’t well versed in the lore of the character.  I remembered some basic things, but that was the extent.  I remembered that Marc Spector was the Earthly avatar for the Egyptian God, Khonshu (the moon God). I remembered that the other characters, Jake Lockley and Steven Grant were just personas he used when working under cover. I also remembered enjoying the comics, so I was excited when it heard about the Disney Plus show starring Oscar Isaac.

The Disney Plus show was enjoyable, albeit a tad confusing at the start, but it was all sorted out by the end (kind of sorted).  I was hoping that because of the show there would be new Moon Knight action figures and I was correct. Produced by Diamond Select Toys, the Marvel Select Moon Knight is a Disney Exclusive.

The Marvel Select Moon Knight is to scale with the other MCU figures produced by Diamond Select Toys and stands approximately 7 inches tall with multiple points of articulation. These points are:

Moon Knight also comes with 2 Crescent Darts (1 gold and 1 silver) and a stand.

I really like the sculpt on this figure. He looks almost like a desiccated mummy with very defined musculature.  This figure looks great, but it does have some issues. The rubber cape really limits what poses you can accomplish with this figure. The cape, as far as I can tell, is not meant to be removed. I did discover that the cape does help with stabilization if you are attempting to secure your figure on the stand. This is the way it worked for me (see photos) and it should work the same for you. If you set up Moon Knight in the “doorway” the cape does hold him in place. Since the stand is not equipped with pegs for the feet, using the cape is the best way to display Moon Knight if you wish to utilize the stand.

I do have to change my opinion from the unboxing video to now. In the video, I stated that I was disappointed Moon Knight didn’t come with double knee joints. Since the cape hinders the mobility of the figure it doesn’t make any difference. The unboxing was just my initial reaction to the figure; I have had a couple of days since filming to reflect and actually play with Moon Knight. I still think that it might have benefited from a ball-joint for the wrists but again nothing major. 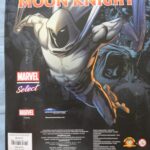 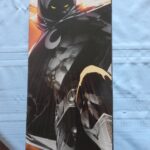 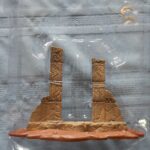 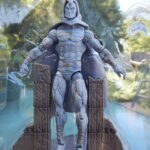 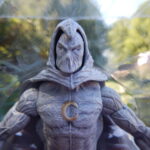 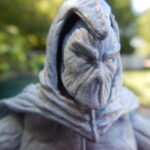 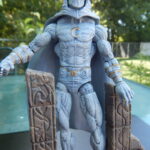 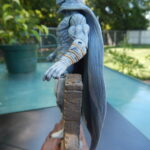 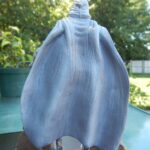 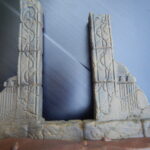 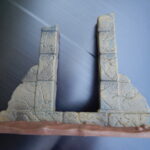 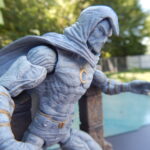 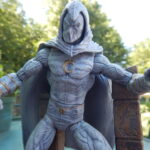 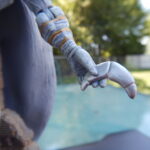 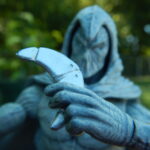 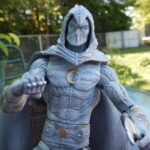 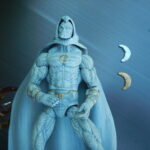 Despite what I pointed out as negatives in my opinion I really do like this figure.  He is poseable and the sculpt looks great, which really is all you need with an action figure. The Marvel Select Moon Knight figure is a Disney Exclusive and retails for $29.99 (USD) and is available now.

Big thanks to our friends at Diamond Select Toys for sending the figure along for review!